A two-year-old Honduran asylum seeker cries as her mother is searched and detained near the U.S.-Mexico border on June 12, 2018 in McAllen, Texas. They had rafted across the Rio Grande from Mexico and were detained by U.S. Border Patrol agents before being sent to a processing center. The following week the Trump administration, under pressure from the public and lawmakers, ended its contraversial policy of separating immigrant children from their parents at the U.S.-Mexico border. Although the child and her mother remained together, they were sent to a series of detention facilities before being released weeks later, pending a future asylum hearing. 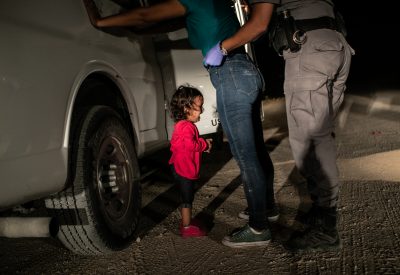